It is the most accepted drug, which causes more deaths and unhappiness, and the one that is not lacking in our celebrations. Research says that you have most likely consumed some amount of this toxin in the last month, and it is practically impossible to find someone who has not tried it. Since man tamed nature, and even before, he has made alcoholic beverages parallel to bread. Wine, beer, or sake acquired a divine nature and were incorporated into the celestial pantheon, coming to symbolize the blood of God. But why do human beings continue to get intoxicated with a substance that is bad for health, expensive, and has harmful effects?

Alcohol is so ingrained in the culture that the first miracle that Jesus surprised his friends and family with was multiplying the loaves and fish and turning water into wine. 2,000 years after his death, the wine continues to reproduce the blood of Christ in the Eucharist.  And in the Sumerian Epic of Gilgamesh, written more than two millennia before the birth of Jesus, Enkidu, a wild man created by the gods to fight Gilgamesh’s abuses, is civilized with bread and beer.

From Egyptian festivals on the banks of the Nile to the peaks of the Andes, different alcoholic beverages have been present in practically every culture in the world. The cost to public treasuries of the effects of alcohol is estimated at tens of billions of euros and dollars, the same goes for private pockets, and an article in ‘The Lancet’ from 2018 calculated that alcohol consumption is It is among the most serious risk factors for human health globally and has been linked to almost 10% of deaths in people between 15 and 49 years of age. In Drunks: How We Drink, Dance, and Stumble Our Way to Civilization(Deusto), Edward Slingerland, Professor of Philosophy at the University of British Columbia, tries to offer a rigorous explanation to the question of why human beings decide to intoxicate themselves voluntarily. To do this, he draws on studies from archaeology, history, cognitive neuroscience, psychopharmacology, social psychology, literature, poetry, and genetics. 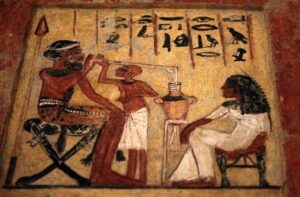 The researcher argues that getting drunk “must have helped people to survive and prosper, and cultures to endure and expand.” The first direct trace of the existence of human-produced alcoholic beverages dates back to 7,000 BC, in an early Neolithic village in China’s Yellow River Valley. Fragments of vessels with chemical remains of a kind of wine, made with grapes, rice, and honey, were found at the site. This is how human communities scattered around the world, after taming nature, began to generate plant surpluses that, stored and left to ferment, generated products such as beer or wine.

Like these sacred texts, the author grants alcohol a civilizing task: “Chemical intoxication helps to solve a series of difficulties typical of human beings: enhance creativity, relieve stress, generate trust and achieve the miracle of cooperating with strangers . We couldn’t have had civilization without intoxication.” he concludes that in order to have survived for millennia with a central position in human relationships, “the advantages of intoxication at the individual level, together with the social benefits at the collective level, must have outweighed its more obvious costs”.

Slingerland closes the work by recalling the myth of Dionysus, kidnapped by pirates when he was mistaken for the son of a rich man, only a helmsman recognizes his divine identity. Thrown into the sea, the god unleashes the storm, transforming himself into a lion that frightens the sailors who throw themselves into the waters in terror and transformed into dolphins. Dionisio only frees the helmsman that he recognized at first, to whom he grants a long and prosperous life. As classicist Robin Osborne pointed out, few acknowledge Dionysus as a god, and only those who do are able to retain their humanity. “Let’s keep our humanity, making sure we don’t forget Dionysus, but see him as a god and as a threat. Only in this way can we leave a place for ecstasy in our lives”, concludes Slingerland.

See also  The United Kingdom is close to victory in Eurovision: the geopolitics of social networks

2022-10-30
Previous Post: 10 Programs to take the Accounting of your Company
Next Post: Who is Gautam Adani and how much is his fortune?

Yes! perfect gifts for sister? get the perfect gift ideas for sister. Follow. Market trends in the crypto.
We use cookies on our website to give you the most relevant experience by remembering your preferences and repeat visits. By clicking “Accept”, you consent to the use of ALL the cookies.
.
Cookie settingsACCEPT
Manage consent