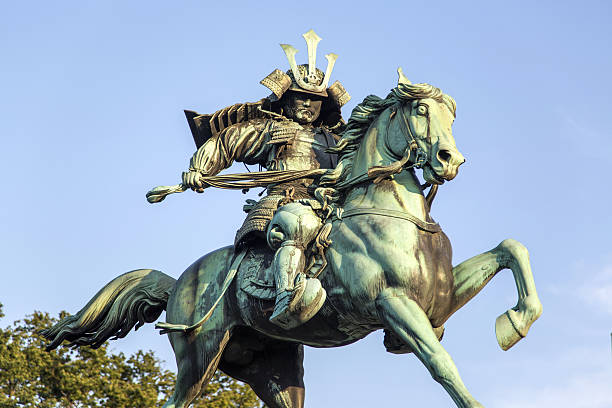 Discovering the history of the samurai

An army of 30,000 men closes in on Yoshitsune and his small group of followers. After three years of fleeing throughout Japan, the warrior assumes his end: he composes a poem, sacrifices his family, and performs ritual suicide. And the myth is born. This is one of the many legends that surround the fabulous history of the samurai, an elite warrior that shaped the future of Japan for more than 1,000 years. Join us on this trip to one of the most fascinating countries in the world to discover the history of one of its great myths: the samurai.

The samurai, an ancient warrior Although its origin can be traced back to the Nara period (8th century), the heyday of the samurai comes with the Heian period (from the 9th to the 12th century), forming an essential part of Japanese society until the Meiji Revolution in 1868.

Etymologically, the word ‘samurai’ derives, according to most historians, from the term saburau, which means to serve. And that was, for centuries, the main mission of the samurai: to serve. To who? To his lord From him. And this is the first mistake that arises when unraveling the figure of the samurai.

Popular culture has given us an image of this warrior as someone lonely, rebellious, independent, and fair. But for the samurai, the most important thing was loyalty to his daimyo, to his lord. All other considerations were secondary, even one’s own life, but also that of others.

The samurai was killed if his master had so ordered. And although it was not the most common, the samurai also killed defenseless beings, including children. The legendary concept of honor of him was, therefore, closely linked to his warrior character, but also his vassal character. His morality was his master’s morality From him. A contradiction that further feeds the legendary figure of the samurai.

Although originally, the first samurai swore allegiance to the emperor, with the rise of the shogunates and the loss of power of the emperor, the samurai rose socially to become the Japanese warrior nobility: the samurai became a political caste serving the ruling clan. And if they did not belong to the ruling clan, they sharpened the katana waiting for their moment…

Bushido, the way of the warrior One of the most interesting elements in the history of the samurai refers to their philosophy and their way of life. Justice, courage, compassion, honor, loyalty, sincerity, and courtesy: seven values ​​that were part of the mythical Bushido, the code of conduct that should govern the behavior of warriors once they reached the top of the social ladder.

The first written appearance of samurai precepts dates from the early 18th century in a breviary known as the Hagakure. But some historians claim that Bushido, as we know it today, is nothing more than a literary work written at the beginning of the 20th century by Inazo Nitobe to promote Japanese culture in the West. In this sense, it is affirmed that the samurai did follow codes of conduct, but they varied depending on the lord to whom they had to pay allegiance.

Even though historical reality seems to bring the figure of the samurai closer to that of the soldier with privileges than to that of the mystical philosopher, the truth is that, unlike other historical periods and other latitudes, the samurai did tend to show interest in the arts. and culture. Zen Buddhism was one of the main beliefs of many samurai that led them to long days of meditation: a kind of cultured warrior with nerves of steel that, without a doubt, thus enhanced his lethality.

The weapons of the samurai The samurai is born and made. Once converted into a caste, the ‘title’ was inherited, so that only the sons of the samurai could exercise such in the future. But, yes, the education to become a samurai began almost from early childhood: a wooden saber was used at the age of five to start in the noble art of fencing.

Without leaving aside cultural training – calligraphy was a fundamental ‘subject’ – young samurai got down to work with all kinds of martial arts that included not only fencing but also swimming, horse riding, and handling spear and bow.

And it is precisely the bow one of the most important weapons in the samurai tradition. Even though the legend of the samurai presents us with a warrior who enjoys dueling with the sword, the truth is that the bow and arrows were the most common weapon in battles, for obvious reasons: the sword only makes sense in the body. melee and most conflicts were fought from a distance first.

Something similar happened with the arrival of firearms in Japan: the samurai took an accelerated course in handling arquebuses, revolvers, and rifles. The samurai were not fools: they knew what could happen if they faced barbarians with pistols armed only with a sword. However, the truth is that the katana became the most important symbolic element of the samurai since they had the duty and the right to always carry it with them, sometimes accompanied by the wakizashi, the short sword or dagger with which they practiced seppuku. the ritual suicide with which they did the harakiri, they slit their bellies

When the imperial family regained power in the Meiji era, one of its main objectives was to put an end to that old warrior nobility. The abolition of samurai privileges was symbolized by the ban on bearing weapons. Without his katana, the samurai was one more. It was the end of the road for the most famous warrior in Japanese history. Just as American literature and cinema contributed to spreading the myth of the pioneer and the cowboy in the Far West throughout the world, the Japanese began a similar project in the 20th century: turning old pre-Meiji Japan into a legend, into substance. pop: this is how the ‘modern’ samurai was born, that myth that we have talked about that is perpetuated thanks to the also legendary Japanese popular culture.

See also  How to Travel Internationally With a One-Way Ticket

One of the great promoters of Japanese culture in the West was none other than Akira Kurosawa, the most famous of classical Japanese filmmakers. Movies like the Seven Samurai, Ran, Throne of Blood, or The Hidden Fortress —that movies that served as more than just an inspiration to George Lucas to devise the Star Wars universe— Brought the figure of the samurai to the whole world, multiplying the fame of the.

In later decades, manga and anime further increased the popularity of Japanese culture, creating hordes of fans around the world. 800 years after Yoshitsune was cornered in that river by an entire army, the legends of the samurai continue to arouse passion… even though it is now forbidden to carry a katana down the street.

2023-01-04
Previous Post: What is psychotherapy? Main characteristics of this process
Next Post: Amazon will cut more than 18,000 jobs, including in Europe

This 360-degree rotating bumper car is the perfect method to entice kids to put down their devices and play outside. Lorem ipsum dolor sit amet, consectetur adipiscing elit, sed do eiusmod tempor incididunt ut labore et dolore magna aliqua. 3 select the token/coin you wish to withdraw.
We use cookies on our website to give you the most relevant experience by remembering your preferences and repeat visits. By clicking “Accept”, you consent to the use of ALL the cookies.
.
Cookie settingsACCEPT
Manage consent