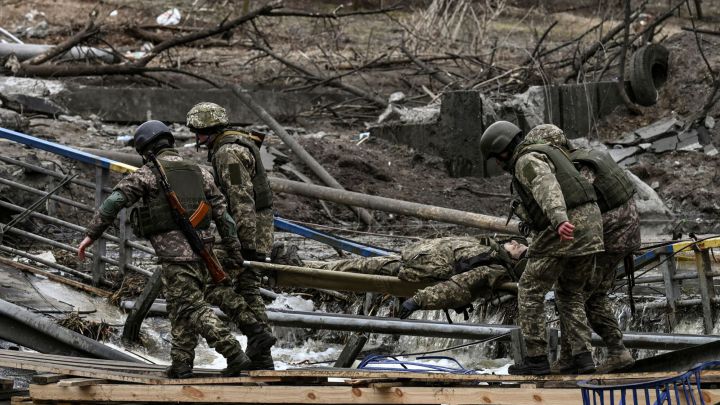 This Will Be Putin’s Foreign Army

Russia intends to reinforce its troops in the breakaway regions of the Ukrainian Donbas with Syrian soldiers who could earn up to 3,000 dollars a month.

Every strategy has a ‘Plan B’. Faced with the resistance of the Ukrainian army, the slow advance of the Russian forces, and the threat of the discontent of the Kremlin soldiers, Vladimir Putin’s alternative begins to appear: a Foreign Legion of Syrian mercenaries. As reported a few days ago by Syrians for Truth and Justice (STJ) and confirmed last Friday by Russian Defense Minister Sergei Shoigu, some Syrians are signing up for battle lists in Ukraine. “There are already more than 16,000 applications,” Shoigu said.

“We have received a large number of requests from various groups of volunteersfrom different countries, who want to come to the Lugansk and Donetsk people’s republics to participate in the liberation movement in any way they see fit,” Shouig said. Syria was one of five countries that voted against condemning Russia’s offensive on Ukraine at the UN General Assembly.

As reported by the British Ministry of Defense this Sunday, Putin has publicly welcomed the recruitment of some 16,000 volunteers, mainly from Syria, to strengthen the Russian front. Shoigu has made it clear that the Foreign Legion will only be sent to Donbas, where the breakaway regions of Lugansk and Donetsk are located.

How much will a Syrian soldier earn on Ukrainian soil?

Why do some Syrians want to go to war? Moscow would be offering a salary to those who support the Russian cause and decide to take up arms in Ukraine. The amount to be received is not clear, and the media indicate very different amounts. According to the Syrian outlet DeirEzzor24, Russia offers salaries of between 200 and 300 dollars.

See also  I did Not Choose to be Born in this Dark Society: Wole Soyinka

According to an announcement quoted by The Guardian, a Syrian soldier could receive up to 3,000 dollars a month (2,750 euros) if he fights against Ukraine, which is 50 times the monthly salary of a Syrian soldier. “Military strikes, foreign operations, and trips to Ukraine, all provided. Salary is up to $3,000 depending on experience,” notes The Guardian. According to testimony to Nikkei Asia by Ali Jafar Askar, a member of the Iraqi militia Asaib Ahl al-Haq, Russia offered him $400 a week (367 euros) to fight with the Russian army. So the salary figures are very confusing.

Why is Syria an ally of Russia?

Russia’s involvement in the war in Syria in September 2015 on the side of Bashar al-Assad was a turning point that has allowed the Syrian president to regain much of the ground lost to the rebels. The Syrian president was among the first to support the “special operation” launched by Vladimir Putin on Ukraine to “denazify” the country.

According to Aron Lund, an expert at the Swedish Defense Research Agency (FOI), “Al Assad’s regime is too dependent on Russia to question the Kremlin’s policy, especially on a matter of such importance to the Russians.” Following in the Russian footsteps, Syria also recognized the self-proclaimed Donetsk People’s Republic and the Lugansk People’s Republic as new countries.

If the conflict in Ukraine drags on and evolves into a “counter-insurgency campaign or turns into a broader war in Eastern Europe, it is conceivable that Putin will be forced to withdraw Russian troops from Syria to Ukraine,” stresses an analysis shared by The Soufan Center. Moscow has an airbase in Hmeimin and a naval base in Tartus, the only one it has in the Mediterranean.

According to Europa Press, what most worries the Syrians —and could, in the long run, complicate the situation for Al Assad— is the economic impact that the conflict in Ukraine may have on Syria. For now, the Syrian lira has experienced a sharp drop against the dollar and the Syrian government has already proceeded to ration basic goods such as wheat, sugar, or cooking oil.

The humanitarian situation in the country was already dramatic. 90 percent of the population currently lives below the poverty line, 12 million already face food insecurity and there are 14.6 million in need of humanitarian aid, an unprecedented figure, according to the UN.

The country is also suffering from the worst drought in decades while inflation, which was already close to 140 percent at the beginning of the year, continues to rise, the UN Commission of Inquiry on Syria warned this week, stressing that the conflict in Ukraine will contribute to higher prices and push more Syrians into poverty.

“I was recently released from the military reserve. There are enormous challenges related to living conditions. After being demobilized, he couldn’t find any job and the situation was extremely complicated ”, indicates a Syrian candidate to fight in Ukraine, in a note published by STJ. “And then, by chance, I heard that the names of those willing to fight in Ukraine were being registered.”

2022-03-14
Previous Post: What Is Data Storage And How Important Is It In Business?
Next Post: Why Did Youtube Decide To Offer Up To $300,000 For Podcasters To Make Videos?

This 360-degree rotating bumper car is the perfect method to entice kids to put down their devices and play outside. No comments to show. Blogs.
We use cookies on our website to give you the most relevant experience by remembering your preferences and repeat visits. By clicking “Accept”, you consent to the use of ALL the cookies.
.
Cookie settingsACCEPT
Manage consent