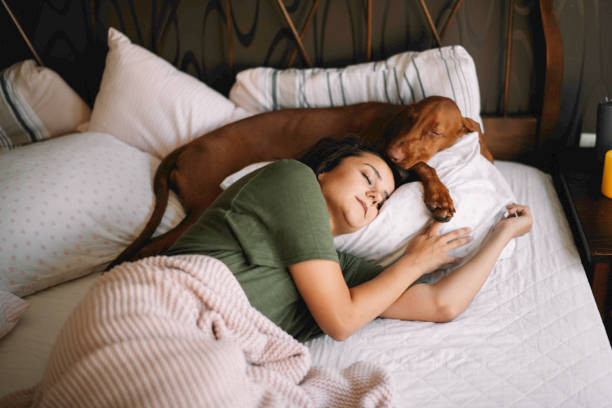 Your Dog Does Not Sleep With You For Love, But To Reach The REM Phase

By: BUZZBONGO
In: PETS
Share this…
As in all mammals, the sleep of dogs also serves to recharge the body’s energy, which significantly reduces its activity, so that the organs rest to a great extent, the metabolic processes slow down and the synaptic connections can be strengthened. say: the brain fixes the experiences learned during the day and assimilates them to remember them and understand them better.However, not all sleep is so restorative and complete in its benefits. Short naps are much shallower and only go as far as a phase called “slow sleep”, in which your dog’s body rests, but not deeply, although the longer he sleeps the closer he will be to the next phase.

What happens in the body while the dog sleeps

In the slow sleep phase, or short wave (also called No REM), the dog’s body temperature decreases, as an energy saver, since the body assumes that it will not be necessary to take action and the efforts of all systems are minimized. Meanwhile, the glands begin to release growth hormones and the cells can begin to replenish themselves, taking advantage of the fact that the body is focusing its efforts on this regeneration, and not on other processes that may require more energy.

However, dogs have inherited from wolves a sleep intermittence that allowed them to survive in aggressive environments. We cannot forget that wildlife makes deep sleep processes very difficult, which means that wolves and wild dogs live less time, and domestic ones that almost double their longevity, this is so because the cells of wolves and dogs Wild animals cannot regenerate as much as they could in a protected environment such as the domestic home: they sleep little and very intermittently.

Dogs have developed a REM phase that wolves can hardly experience, as it requires deeper sleep. The acronym translates into English as “Rapid Eyes Movement” (rapid eye movement), and as with humans, it refers to the most intense phase of sleep, in which breathing becomes faster and more irregular: when they dream (like us). It is the phase that could seem more restful, but it is not so much, because brain activity intensifies so much during sleep that it seems that the dog is awake.

What do dogs dream of?

Dogs can become agitated during REM sleep: change position suddenly, moves their legs as if they were running, or bark making unrecognizable or distorted sounds. Like sleeping people, who speak but are poorly understood, dogs cannot emit a consistent bark either because their organs are at half throttle and the connection between the brain and the body is almost off when it comes to voluntary acts.

REM sleep in dogs is rarely achieved and for a short time. This is due to two important factors: on the one hand, they have inherited a greater phase of slow sleep from the wolf, and on the other, dogs do not have as much need to process information as humans. It is not that things do not happen to them, but their thinking is not recreational, they do not reflect, and although they are sentient beings, they do not appeal to their emotions rationally, they do not generate complex links between their memories and their points of view. The degrees of compliance or non-conformity of dogs are much more specific and not very convoluted, so the necessary conditions for a REM phase to occur do not always exist.

See also  Dog Body Language: Here Are Some Tips To Understand It Better

Your dog does not love you (so much), what he is looking for is to dream

Humans often misinterpret the possible “feelings” of animals, we believe that they react to us with love, anger, or jealousy, but if we apply animal common sense we will discover that reality is much more pragmatic.

For example, you may think that your dog likes to sleep with you because he loves you so much that he insists on crouching between your legs or leaning on your belly. The truth is that he loves you, but that is not the reason why he does it. Evolution turned wolves into social animals within their pack, they are gregarious, and dogs have inherited everything related to that.

When your dog insists on sleeping in your room and even climbing into your bed, he’s not doing it out of love, but out of survival. The only way to get into deep REM sleep is to feel fully protected, and that’s only possible if another member of the pack is next to him while he sleeps. Dogs “synchronize” their breathing to yours, as if they were a proximity sensor, their brain picks up your signal when you breathe, and if you are close, it makes perceiving your body close to being a confirmation that you care for him. All this means: “I can sleep in peace, my human will defend me if something happens, and I can dedicate myself to dreaming in the REM phase”.

2022-07-17
Previous Post: What Is The Perfect Time And Frequency To Walk My Dog?
Next Post: History Of Facebook: Birth And Evolution Of Mark Zuckerberg’s Social Network

Yes! perfect gifts for sister? get the perfect gift ideas for sister. No comments to show. All about crypto.
We use cookies on our website to give you the most relevant experience by remembering your preferences and repeat visits. By clicking “Accept”, you consent to the use of ALL the cookies.
.
Cookie settingsACCEPT
Manage consent