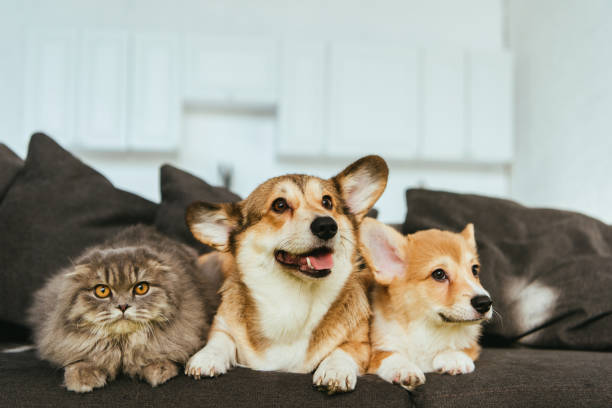 By: BUZZBONGO
In: PETS
Share this…
One of the most characteristic gestures of dogs is yawning, perhaps because their large triangular jaws turn them into little beasts when they open their mouths showing all their teeth.

These canine yawns are very common and it seems that they do not attend to anything in particular, because they do not always seem to be sleepy, quite the opposite. Many times they yawn when they are in full play, enjoying or learning. You may also have noticed that your dog can be harassed and yawn when you yawn. What do all these situations mean?

When your dog yawns it may be because he is nervous. You can probably empathize with him if you remember situations in which you also felt that way. It is a very common mechanism of mammals: the brain feels collapsed in certain situations of fear and needs to de-stress. At that moment the yawn arises.

When we yawn we are moving the muscles of the face, we are promoting the closest thing to cleaning any stiffness of the facial muscles, and with the yawn deep inspiration arises. A large amount of air enters our lungs that impacts our consciousness, it clears us physically, because it regenerates the rhythm of breathing, and that way of clearing ourselves also affects the brain, which receives a breath of oxygen.

Yawning is an instinctive tool, both in humans and in other mammals such as dogs. By yawning we are appeasing the mental and physical blockage that stress produces in us, oxygenating us to be able to make decisions and, in the primary case of animals: survive in the face of moments of terror.

In the same way that yawning is a way to refresh our brain when we feel a mental block due to stress or anxiety, the main objective of all yawning, whether human or canine, is really to clear our minds: and take away our sleep. Therefore, when the brain perceives a drowsy state but the mind does not seem to want to disconnect because it is busy with other issues, it is the brain that sends a message to the muscles to start yawning.

As in oxygenation to relieve stress, yawning also plays its role in helping dogs (and humans) to wake up and escape from drowsiness. When you yawn, you are exercising your jaw and introducing a significant amount of air into your lungs, which will later be pumped into the bloodstream as oxygen.

Once we know the basic mechanism of yawning, which consists of waking up the mammal and making it more focused and alert, we can better understand that in moments of confusion the dog can feel the overwhelming urge to yawn. This occurs in training sessions in which the animal may feel upset by the volume of information that is explained to it and the stimuli it receives.

If a dog begins to feel that he is losing control of the situation, that the amount of stimuli is excessive, and that he is not up to the task, because for example, we are expecting him to behave in a certain way, we encourage him over and over again, we present him with reinforcements, and we continue with that task without him feeling capable of understanding us, yawning emerges as an instinct to overcome, for him, it is a warning from his brain that tells him “come on, focus”.

See also  What Is The Perfect Time And Frequency To Walk My Dog?

Your dog yawns because you do too

Although both dogs and humans may have very similar reasons for yawning, a study by the University of Tokyo has shown that dogs often yawn out of solidarity with their reference humans.

As you may have noticed, your dog wants to accompany you to everything you do. If you go to bed, so does he. If you eat, so does he. If you go to the toilet, so will he. All the more reason why if he catches you yawning, consider it a good idea for him to yawn too. It is for him a way of telling you: we are colleagues, we are part of the same pack.

This fact is even more surprising if we take into account a study by the University of Porto (Portugal) that discovered that dogs can sonically recognize the yawn of their owners, discriminate other yawns from random people, and not only that, but the response of the dogs continued to consist of yawning empathetically, even if they do not see their owner, they only listen to him.

According to this study led by Teresa Romero, the fact that dogs show empathy over human yawning is reasoned, it is a question of evolutionary non-verbal communication, in which herds or groups of mammals that form a group communicate instinctively and not consciously. In this way, if one feels fear, anxiety, or sleep, and his body decides that it is time to oxygenate, the other members of the herd, to prevent anxiety, confusion, or fear from also attacking them: also yawn, defend themselves as a group from what affects only one.

See also  At What Age Is A Dog Considered "Old"? Experts Answer

2022-06-09
Previous Post: They called him “the crazy Libyan” and the “deranged dog of the Middle East”: Gaddafi, the tyrant who pushed the limits of cruelty
Next Post: Pope Francis postpones his trip to Africa due to health problems

You always want to be able to discover the ideal birthday gift whenever someone you know celebrates a birthday. Photo. Best cryptocurrencies to invest in.
We use cookies on our website to give you the most relevant experience by remembering your preferences and repeat visits. By clicking “Accept”, you consent to the use of ALL the cookies.
.
Cookie settingsACCEPT
Manage consent