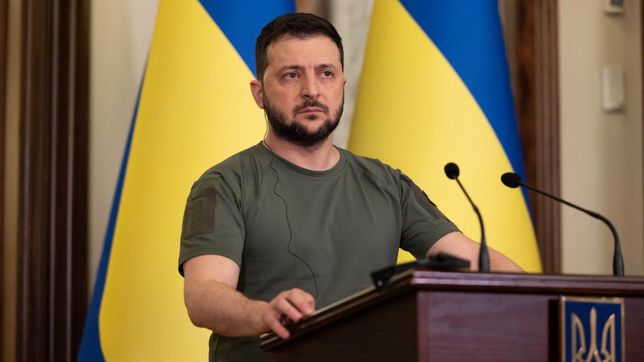 Zelensky ‘challenges’ Putin: predicts what will happen from now

During these weeks the Ukrainian flags have increased in Donbas, as a result of the recovery of territories occupied by the invading Russian forces.

The president of Ukraine, Volodymyr Zelensky, assured that the flag of his country is already flying in many places in Donbas where Russia held annexation referendums that he described as a “farce”. “Russia staged a farce in Donbas. An absolute farce that he wanted to present as a referendum the”, The Ukrainian president exhibited in his usual message at night.

In addition, he added that they staged a “number”, they went through the houses with ” machine guns “, distributed pieces of paper, and the propagandists made ” films ” of the occupied areas. “And now the Ukrainian flag flies there,” Zelensky argued.

The importance of Lima

According to the president, who has shown tremendous bravery and courage, during these weeks the Ukrainian flags have increased in Donbas, as a result of the recovery of territories occupied by the invading Russian forces, and “next week there will be even more “.

This Ukrainian politician expressly referred to the city of Liman, in the Donetsk region, where Ukrainian troops have already entered and forcefully expelled the Russian army. “The Ukrainian flag is already flying in Limán and it is going to stay there. There are no traces of the referendum in that place ”, he pointed out.

Zelenski, with gestures of exhaustion, insisted that Ukraine will not surrender and will recover all of its territory, which includes the Crimean peninsula, annexed by Russia in 2014. This is a geopolitical enclave for which throughout history Numerous nations and empires have clashed: control of the Black Sea is a critical asset if you want to dominate Eastern Europe, the Caucasus, and the Anatolian Peninsula.

“Ukraine will take back what belongs to it, in the east and in the south. What is trying to be annexed now and also Crimea that was annexed in the year 2014. Our flag will also be present there, ”she concluded forcefully.

He also stated that he had talks with the French president, Emmanuel Macron. “We discussed the importance of improving Ukraine’s defense support. Touching on the issue of nuclear blackmail by Russia, we discussed the situation at the Zaporizhzhia nuclear power plant, its immediate demilitarization, ”he said.

Lastly, he wanted to thank his work for strongly condemning the illegal referendums and attempts to annex Ukraine’s regions by the aggressor. “We expect a strong reaction from the world regarding Russia’s illegal actions, in particular through the strengthening of sanctions pressure “, he concluded.

2022-10-03
Previous Post: Do You Know The Characteristics Of Happiness? We Present The 4 Most Important Qualities
Next Post: Compound interest, the eighth wonder to create wealth effortlessly

Check. Retirement homes in vadodara - care home for bedridden. Blogs.
We use cookies on our website to give you the most relevant experience by remembering your preferences and repeat visits. By clicking “Accept”, you consent to the use of ALL the cookies.
.
Cookie settingsACCEPT
Manage consent